Our Lady Help of Christians site before the church was there

There's a fantastic pictorial record of Brunswick's first century in the Moreland Libraries collection and it's even available as a download through the Local History Catalogue. It's called 'Pictorial Brunswick 1839-1939' and was prepared during the Centenary year (ie 1939).

In all likelihood it was prepared by the Brunswick Historical Society, a group that had been established in 1937 to prepare for all the Centenary activity. In July 1938 (see Age, 29 July 1938), they'd had a large number of glass lantern slides printed and they put on an exhibition at the Town Hall. According to the newspaper, it showed 'old homesteads, the birth of Industry, the development of transport, and many interesting landmarks'. The Society donated their lantern slides to the Council and today the images have been digitised and made available through the Moreland Libraries catalogue. The Brunswick Historical Society disbanded in October 1959 and today we have the Brunswick Community History Group, which is interested in collecting memories, memorabilia and images from Brunswick's rich past.

And here is one image from 'Pictorial Brunswick' showing part of the suburb's rich industrial heritage. It's the stone quarry that was worked on the site of what is now Our Lady Help of Christians, in Nicholson Street, East Brunswick. The house in the background has been identified as Yeo House (which was in Barkly Street east and was the home of an early Mayor Thomas Stranger, councillor and quarryman). 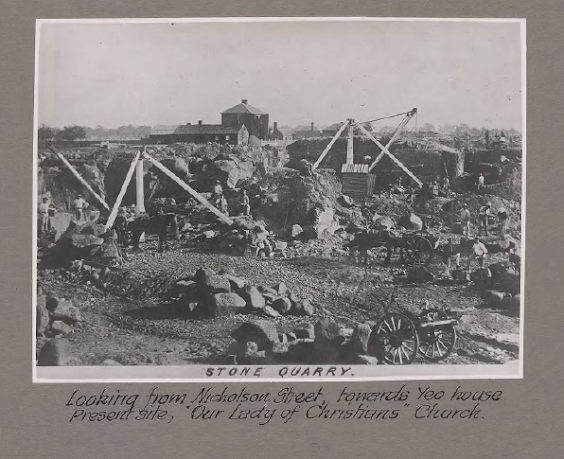 I'm giving a talk (a May Day tribute) on Brunswick activists and activism at the Brunswick Community History Group on Saturday 1 May at 1.30pm.

It's at Siteworks in Saxon Street, Brunswick (off Glenlyon Road).

Among others, I'll be talking about the contribution of trade unionist and historian extraordinaire Les Barnes, pensioner warrior Marg Nunan and Noel Counihan and the Free Speech protest. Plus much more ... 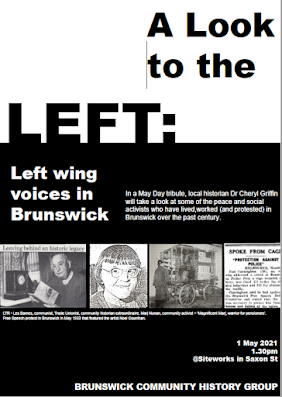 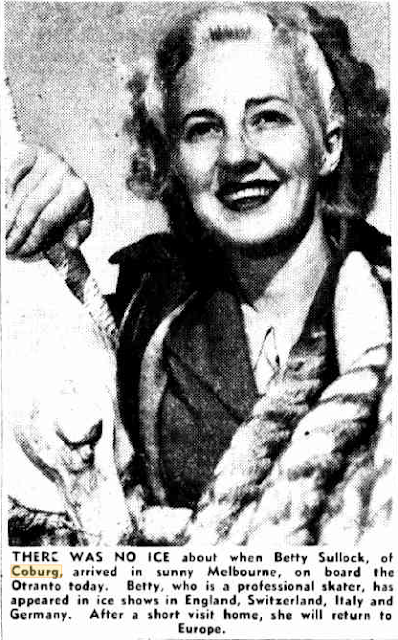 She learned to skate at Melbourne's Glaciarium (also known as The Glaci) at what is today's Southgate (near the State Theatre). 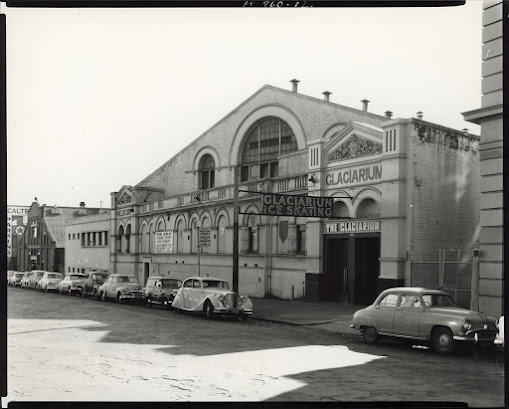 In September 1949, aged 23, Betty set off for England to skate at the Westover Ice Rink at Bournemouth during their summer season. 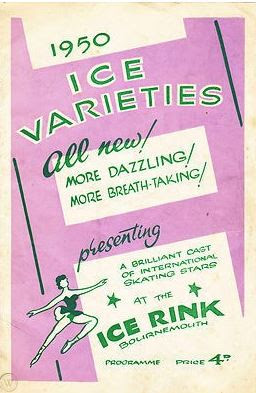 In the late 1940s and early 1950s, she skated in England, Sweden, France, Germany and Belgium and her speciality was pair and figure skating.

By the end of 1952 she was performing regularly in Australia - in Armand Perrn's 'Ice Follie' at the Tivoli Theatre in Sydney and in the show 'Hot Ice' which toured Australia from September 1953 to June 1954. By then she was married to Ken Donaghue, a stage manager of Potts Point, Sydney. (His father Jim was also a stage manager and both men worked at some stage for the famous theatrical company J.C. Williiamson's.)

The couple lived in the Sydney area where they raised their family.

I've written about Nick Gadd's Melbourne Circle project before and you can check it out here and here.

Now you can read his book. 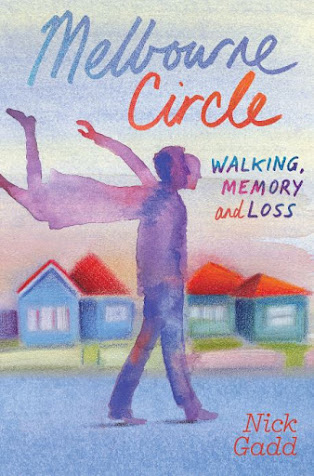 Read all about Nick's book here.

And they're racing at Flemington, November 1956 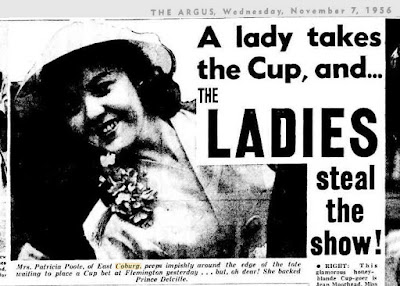 This photo features Mrs Patricia Poole of East Coburg, according to the Argus newspaper.
I've checked all the usual sources and can’t find any evidence of her being in Coburg, so probably she lived in the area for a short time only.
It's possible her husband was Stanley Philip Poole born in Northcote in 1917 (died Heidelberg, 1981). If so, then she’s Patricia Wright and they had been married for fifteen years when this photograph was taken.
If anyone can tell me any more about Patricia Poole or the Poole family in Coburg, please get in touch. 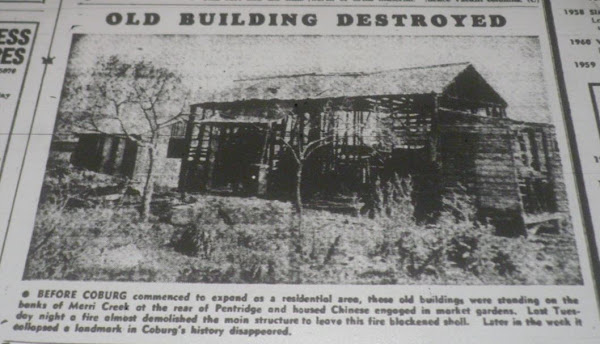 Coburg Courier, 10 October 1961
This photograph was taken almost 60 years ago and it's hard to believe now that there were once flourishing Chinese market gardens where the Coburg Olympic Swimming Pool now stands.
For some years I've collected information and stories of various Chinese individuals and families who lived in the Moreland area.
Along the way, I've collected anecdotes, like those you see here:

The Chinese lived next to Pentridge past the convict-built bridge in Gaffney Street. They grew vegetables and lived in a building which would not be permitted nowadays. They fertilised their vegetables with human and animal excrement. Their English was mangled but the vegetables were brilliant. The old man also sold dim sims, squatting on the footpath outside Drum’s Hotel. He had some sort of steaming device. I have never tasted a better dim sim since.’ (Watt family member, Fine Crotchet and Common Sense)

Where the baths are, there used to be Chinese who grew their own vegetables. We used to buy most of our vegetables from them. We hardly had to go to Sydney Road at all.’ (We thought we had nothing to say: Stories from Newlands and its people, 1990)

I lived near Coburg Lake and we used to swim there and stole carrots from the Chinese gardens at the back of Coburg Lake until we saw the pan man tip the pans on the gardens. Never ate carrots for a long time. (80 year old, Facebook)

Where the swimming pool is now, the Chinamen owned it. They grew pumpkins and all kinds of vegetables. The larrikins would get hold of the pumpkins and throw then down Murray Road. I don’t know what happened to them, the little devils.’ (Watt family member, Fine Crotchet and Common Sense)

This is an ongoing project. It began when I recorded and researched the men buried in the Chinese Section of Coburg Cemetery. More than two hundred men were buried there between 1908 and 1922. Mostly they were middle-aged men from the impoverished Canton region of southern China, who arrived in Australia before the overthrow of the last Chinese emperor and before Sun Yat-Sen declared China a republic in January 1912.

From there my interest grew and although I've moved on to other projects unrelated to either the Chinese or Moreland history, I'm still interested in pursuing the story of the Chinese in the Moreland area.

If you have a story you can contribute or a resource you can recommend, please let me know. 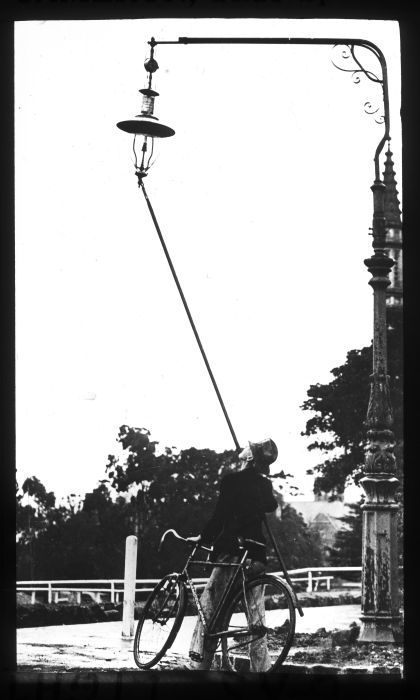 Gas lighter. Image courtesy Moreland City Libraries. Lantern slide no.352.
I'm not sure of the identity of this lamp lighter, but his duties were to light the street lights of an evening then turn them off later in the night.
Coburg's stock inspector in the early 1900s was one-armed James Deeker, who also acted as the Coburg Council's part-time lamp lighter. It must have been a tricky task for a one-armed man and it involved later hours - he'd light the lamps each night at nightfall then turn them off at midnight, presumably then riding home in the dark.
at September 23, 2020 No comments:

cherylg
I've been interested in history since I was a kid. Over time, I've researched my family history, completed several post grad degrees in education history, got involved in a variety of projects relating to the convicts of Van Diemen's Land and of late I've been very much involved in the history of my local area - Moreland - and in particular the suburbs of Brunswick, where I live, and Coburg, where I spent seven years as a teenager.